April 10 — to others it was just another ordinary day, but for the members of Goodreads-The Filipino Group it is a day to celebrate as Sunday marks the group’s first year Meet Up Anniversary.

Reminiscing about it a bit, a year is fairly a long time for the unsuspecting bunch of people who first met “to put a face behind the username” in a restaurant in Trinoma who, for the first time in their lives found the people who can understand them, telling each other’s favorite book then afterwards gamely playing a round of Pinoy Henyo and got booted out of the place for playing it too loudly while the adjoining table sang a cacophonous tune of Happy Birthday — much to their chagrin — to the folks’ heart’s content. 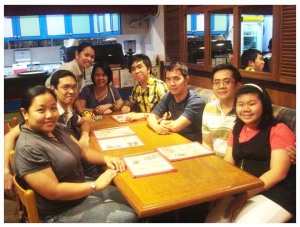 The Filipino Group's First Ever Meet Up!

Fast forward to July 24 of 2010 when we had our Second Meet Up which was deliberately coincided with Kuya Doni’s birthday, dear (foster) father and moderator to us all. This time we had a room for ourselves, thus eliminating the chances of us getting kicked out but having not the foresight to what bookish peeps can do when confined to closed quarter when it involves fierce competition for a much coveted books over a game of Pinoy Henyo (yet again!) and charades. We even have to set aside the cutleries to prevent two members from hurting each other, else someone will go home with a gouged eye; but I exaggerate which means I’m just kidding. But we did have a swell time, so much so that we even had to extend the hour of the reserved room, then transferred to a coffee shop in Trinoma and by the end of the night we still feel that we haven’t said it all — even after nine hours straight of book talk, that is! 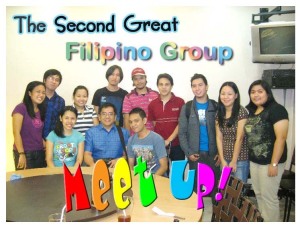 In between mini meet ups, dinner meet ups, coffee meet ups, Komikon meet ups, sine meet ups, drinking session meet ups, and a trip to Alabat Island in Quezon province, we come to the Third Meet Up which really was our X’mas Party. I will not go on to specifics now since you may read my own account of the event in this post and I do agree with my good friend Tina that it was “the biggest post-party non-alcoholic hangovers in the history of all Goodreads meet-ups.” 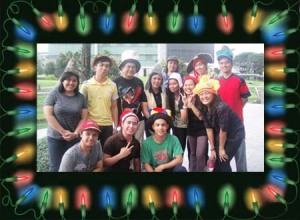 And now here we come to the fourth, the recent, our Anniversary Meet Up which is just a simple get-together lunch at Racks in El Pueblo, Pasig City. As precedent would have it, there’s no program whatsoever for  such a special day, nonetheless excitement once again rose to a fever pitch as I will meet another batch of newbies and as well as do some catch-up talk with the oldies. I particularly looked forward to meeting Lynai, one of the most long-time members of the group and a Goodreads user even before I have the good fortune of stumbling upon the site. She’s been a (online) friend for a good two years now and finally meeting her in person is nothing short of thrilling. Then there’s Monique who finally made it as she’s been meaning to attend the meet up last year along with Angus, TinTin and resident idol book reviewer Aldrin in full regalia Catcher in the Rye shirt. As the afternoon passed on other members started trickling in.

After a round of eating and chatting some of us did a preliminary book discussions and book swap, then off we went at the nearby branch of McDo (our original plan was to hang out at Dunkin Donuts but the place can’t accommodate our sheer number and noise) where Kuya Doni graciously treat us for some coffee, drinks, sundae, and French fries. We lined up the tables then proceeded with the White Elephant Book Swap moderated by Tina in lieu of Pinoy Henyo while munching on Lynai’s pasalubong of Biscocho House’s Butterscotch. Yummy!

And there we are at, talking of books and sundry topics. Louize and I discussed Alice Walker’s The Color Purple and Laurie Halse Anderson’s Speak. Too bad  I wasn’t able to talk with Lynai (who attended with her boyfriend) who have to leave already and a moment later Monique has to go too, because Mommy duties needs to be heeded. TinTin and Kwesi did a Tarot reading for some of us who have questions about their love life, career and whatnot divined. Surprises of surprises, another newbie showed up in the person of Veronica, who prefers to be called in her nick Ronnie, and I was glad to have the oppurtunity to talk to her, grateful as she was of the present company who share the same passion and enthusiasm for books and reading. It is also with her coming that all hell broke loose as we tussle for the bunch of books and Help Me Bookmarks she brought along. I was so hyped up by that time (caused by too much coffee apparently) that I simply have to wrestle Kuya Doni just to get that copy of Arundhati Roy’s The God of Small of Things! Thus, a new game was born: Book Wrestling! Getting violent and violent, are we?

It is only a day after that I became well aware of the shameful act I did — while laughing beside myself.

A few coffee cups later, laughs at the mispronounced beard (berd), juicy gossip on Angus’s short but rosy stint in one of Brillante Mendoza’s film and all of the Butterscotch was consumed up to the last piece, Kuya Doni called our attention that it was now time to leave. So reluctantly we went out of McDo yet still you can see in each and everyone’s eye that we’re not ready to call this night off. Actually, all of us are just warming up and we would’ve jumped at the opportunity to have a few drink or two (or even a cup of coffee though having one too many of it already) but it’s Sunday, which means some of us have to report early next day for our respective jobs. To put it concisely, BITIN AKO!

If only this could’ve happened on a Friday then all of us were gettin’ down and partyin’, partyin’, yeah, not caring any less if it’s followed by Saturday next by Sunday afterwards by Monday… but I digress.

They say every Meet Up is better than the last, to which I heartily agree, and I’m quite proud that this has the most turnout of close to twenty members! I think what makes The Filipino Group Meet Up such a special bookish affair close to my heart is its feeling of warmth and intimacy where just about any topic could be discussed, not just only bookish stuffs. I never thought that I will still make friends outside the small circle of barkadas in high school and college — and mind you they’re virtual strangers at that! I will never regret that fateful day when I stumble upon the site on the prowl for “good reads” on the internet, learning the ropes how the site works and eventually building (and bragging) my virtual library.

If I may repeat what I’ve already said, more than good books… we’re a FAMILY here!

You all are my new-found family… for keeps. 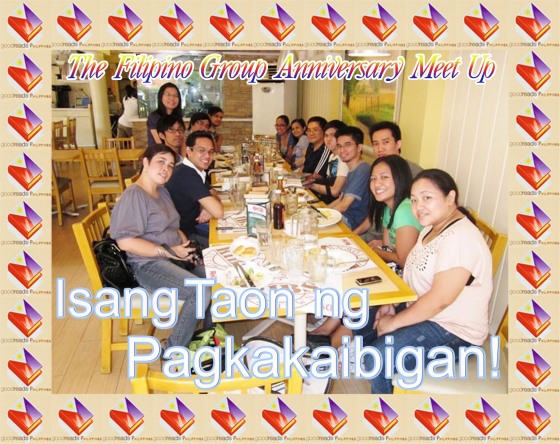 The Fourth, The Filipino Group Anniversary Meet Up

Now on to the second part of this post expressing my gratitude for the people who made it all possible and the awesome book haul I got during the Meet Up. Well, it goes without saying that everyone didn’t just go home with a smile on their face but with a loot bag loaded with books and stuff. 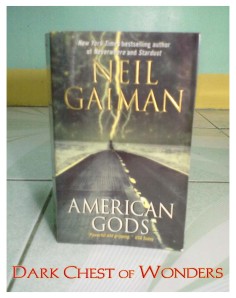 I swapped this book from Joyzi for my copy of Margaret Atwood’s The Handmaid’s Tale. This will be my second Gaiman book, the first was Neverwhere. 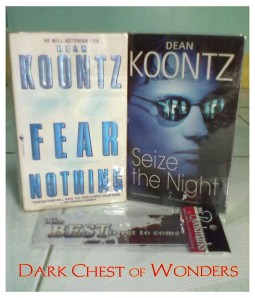 Dean Koontz’s Fear Nothing & Seize the Night and PVC bookmark

Thanks to Louize for these two books by Dean Koontz. I’ve been collecting his books for a while now and I love the PVC bookmark she gave me with an inspiring message taken from the Scripture! 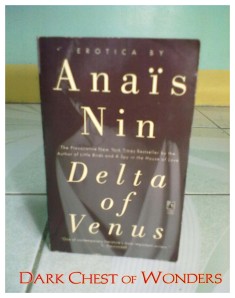 Delta of Venus by Anaïs Nin

This was from Angus which I swapped for my trade paperback copy of The Grapes of Wrath. I have already read Nin’s sequel of sorts to this book titled Little Birds and I am impressed by how she  tenderly writes erotica in the female point of view. 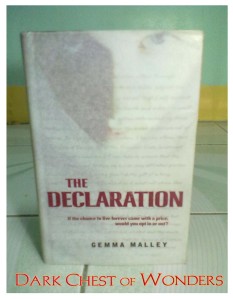 The Declaration by Gemma Malley

I’ve been seeing this book for some time in numerous Booksale branches habitués of mine, but the compulsion to buy it never occurred to me, which was really a good thing because I got to booknapped this from Aaron of Guy Gone Geek! Thanks! 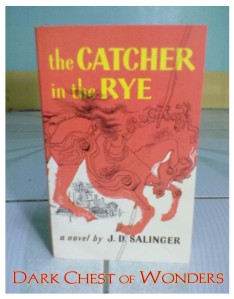 The Catcher in the Rye by J.D. Salinger

This was the book I won from the White Elephant Book Swap which originally came from Aldrin. I’m really aiming to get News from the Shaman but Tina stole it from me.

Oh well, this is just as good since my former copy of this book is already read into rags. 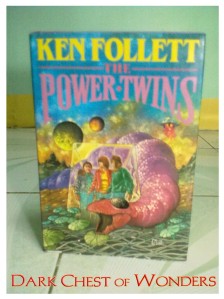 This one was a gift from Ranee which she intends to give first to Kwesi — since he likes children’s books a lot. Well it seems my plead of being a true blue Follett completist worked enough for him to give in and I was surprised to learn that Follett tried his hand writing books for the Middle Grade / Fantasy Genre. This will be handy for my planned reading list in June. 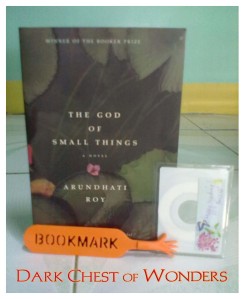 The God of Small Things by Arundhati Roy, Help Me bookmark and book plate

Seeing this book now still makes me crack up!

This is the book I got by wrestling it from Kuya Doni, seriously I want to thank Veronica for the  book (which is still steeply priced in some of our bookstores) along with the Help Me boorkmark, the bookplate and for the second round of coffee treat. 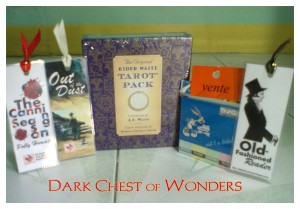 I was surprised to get this set of Tarot Cards from Kwesi of Old-Fashioned Reader as this will help me in a project I’m currently doing. And I love his idea for a Group Book Read bookmark for Out of Dust and The Canning Season! Thanks also go to Tintin for the Bugs Bunny notepad.

Indeed, it has been an awesome year spending it with you guys sharing not only books, but also what life and experiences has to offer in between.

Here’s for the coming years, future friends and more…

I’m definitely looking forward to it!

8 thoughts on “An Awesome Year Indeed!”

Feel free to post any of your thoughts, comments, and reactions. Cancel reply

Hi, I’m jzhunagev! Reading books is my life and I have always been entranced by the power of words. I love the pull of a good, well-drawn story, regardless for what age it is written for; no matter what genre it belongs; whether it’s fiction or not; whether it’s written in ink on paper or pixels on screen, or as a limerick. If it reaches for utter humanity, in jest or in earnest, I’m going to like it. 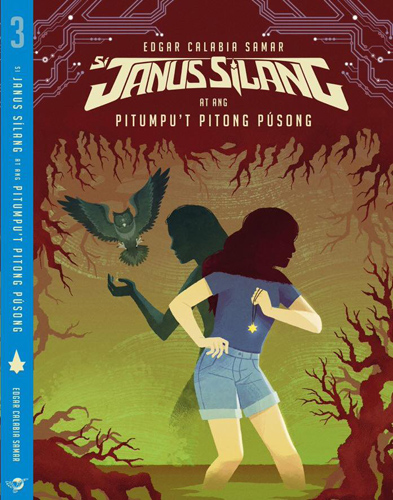 Where I Lurk Elsewhere

A Proud Member of

Dark Chest of Wonders by jzhunagev is licensed under a Creative Commons Attribution-NonCommercial-NoDerivs 3.0 Philippines License. Based on a work at darchwonders.wordpress.com

2010-2017 © Dark Chest of Wonders - jzhunagev. All Rights Reserved.
No content or images on this blog site may be used without the permission of jzhunagev and/or the respective image owners.
Loading Comments...
%d bloggers like this: